The Wright Files: #2 – Phoenix Wright: Ace Attorney – Justice for All

Justice for All has its moments of brilliance undercut by inconsistent storytelling and continued gameplay irritations. 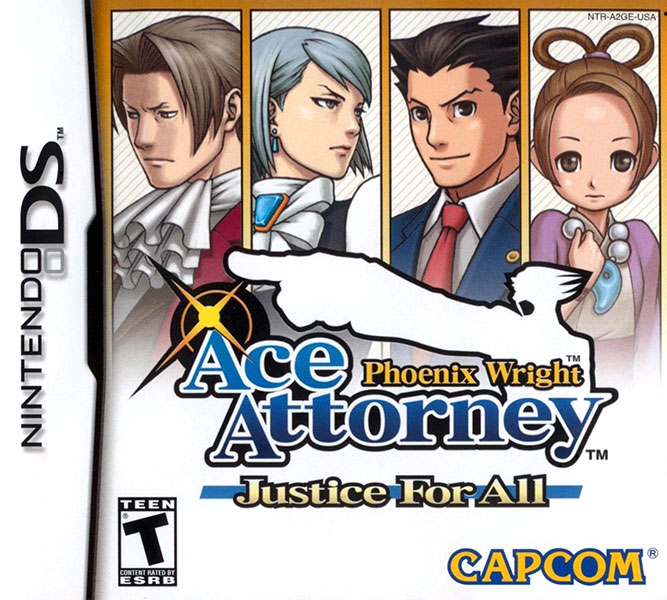 Phoenix Wright: Ace Attorney became a worldwide hit after it launched on the Nintendo DS; a surprising outcome that Capcom was rightly keen to take advantage of. Inevitably the first sequel would occupy a tight spot, what with it being hastily localised and shipping with no exclusive episodes or special features.

All things being equal, Justice for All is a let-down mostly because of Capcom’s unwillingness to fix pre-existing problems. You now have the ability to rewind testimonies, thankfully, though aside from a few stylistic touches and some added frames of character animation, the list of strict improvements kind of ends there.

Moving between locations during investigation segments is still a chore, as is presenting evidence to hurry said segments along. And then you have the new courtroom penalties which are arguably worse than they were before.

Wright now has a Confidence Meter; a health bar that diminishes with every wrong answer that a player submits during cross-examination. The penalties are also now weighted by severity, which allows even less margin for error, with certain instances in the final episode triggering an instant game over should the player make a mistake.

Not content with only making this system a bit worse, Capcom also set the meter to replenish during certain milestones of the investigation phase and not in between chapter breaks. Everything about this sucks, though it wouldn’t be quite so baffling if players could speed up the screen text following a retry. Alas, in these instances players are still expected to slowly read back to the point where they left off.

Even more-so than its predecessor, there are times when it seems Justice for All doesn’t want you to enjoy yourself. The penalties will provide tension in buckets for the masochistic few who don’t save scum, but trying to catch the player out with instant failures and other cheap tricks is nonsensically harsh. Players who aren’t good at lateral thinking are not made to feel welcome for some reason. It’s odd considering the Nintendo DS console owes its fame to accessible design sensibilities.

It’s only more dispiriting because of how strong the writing continues to be. Submitting wrong answers and evidence often leads to hilarity in the court, – like one wonderful bit where Wright inadvertently accuses the Judge of foul play! – only players can’t easily experiment with these funny moments because of their brutal consequences.

Ace Attorney is a visual novel at heart, yet the penalty system is directly intended to gamify the experience. Like the gamebooks of old, this ‘start over’ method of punishment never worked. The only difference in Ace Attorney is that you can’t stick your finger between the pages. Well, not easily anyway … 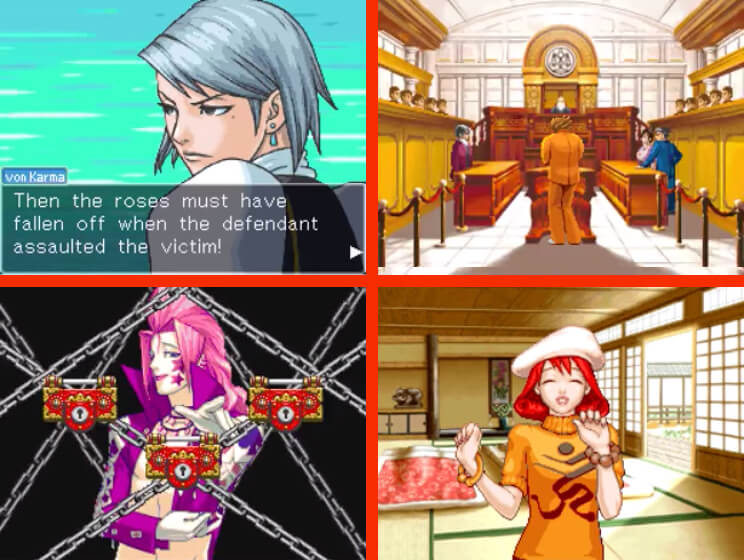 One instance in the game allows Wright to confer with his mentor before answering a crucial question. This was a superb idea that sadly gets deployed once before promptly being forgotten about. Whether for gamebooks or visual novels, the talk of penalties has always been a bit of a design riddle, but it wouldn’t hurt quite so much here were it not for Capcom’s demonstrable record of always implementing the most annoying solution.

More changes come via the new “Psyche-Lock” system. Wright collects an enchanted pendant that allows him to manifest people’s secrets as padlocks that can be broken through sound reasoning. The basic mechanics here work exactly like the courtroom phase; the subject tells a lie and you try to rattle them by finding contradictions in their statements. Break all the Pscyhe-Locks surrounding a subject and they’ll tell you their darkest thoughts, with wrong answers prompting penalties that once again waste your time and don’t add anything to the experience at large.

On one hand the Psyche-Locks help steer your investigation in the right direction, and there is the added thrill that comes from interrogating suspicious characters. The aforementioned penalty system seriously undermines all of this, however, and sometimes it can be hard to tell if you have the right evidence to bust those locks to begin with.

Wright can present witness profiles as evidence now too. It’s another wrinkle to consider when putting together a case, and yet it’s hard to remember that the associated UI is even there, ultimately making the mechanic more hassle than it’s worth. 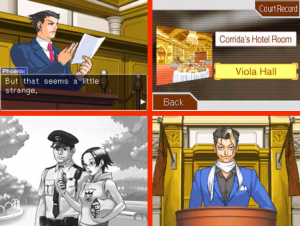 New music is used for each major slice of the game. Even the save screen has a fresh jingle.

Justice for All will live or die by its storytelling though; easily the most vital ingredient to review. Unfortunately, the quality of its case files are best described by using the old phrase: “The highs are high and the lows are low.”

Of the four cases presented here, two of them are uncharacteristically bland. The introductory case is particularly hated by some fans (despite it being a meatier starter than usual), and whilst it has a few good moments, the third case is especially poor considering both its length and its higher placement on the card. It’s lucky that the remaining cases overachieve with some excellent twists and fun characters. The ending is also well-handled, which is gratifying considering that 20+ hours will be needed to put in a completion.

Whilst some recycled characters and plot threads hint at an unfortunate economy on Capcom’s part, their talent for good translation is still readily apparent. The running jokes are still smartly written (Detective Gumshoe’s salary deductions being a really funny one), the cutscenes are still on point, and you’ll be treated to plenty of cultural zingers that reference everything from Yogi Bear to The Fresh Prince.

When it’s good it’s really good. And it’s fortunate that most of the best moments come during the game’s longest and most satisfying case file; a formula-busting extravaganza that accounts for a generous portion of the overall play time.

What a shame that the journey there had to be spoiled by so many frustrating design decisions. Justice for All is still an entertaining enough video game in its own right, but as a sequel to a blossoming franchise, it’s hard not to feel a little disappointed.