I’ve been thinking a lot about Magic: The Gathering recently what with my Magic Duels series being well underway. One thing I’ve always wanted to do is revisit the topic of “best MTG flavor text” with a brand new top 20 list featuring more card flavour that I’ve discovered since my original foray back in 2014.

Looking at the list of cards I’ve compiled for this second volume suggests that I’ve become a fan of the more thoughtful applications of flavour text, but whether they’re written to make you think or just to make you laugh, it’s clear that Magic cards are still the undisputed king of this particular art form.

So without further ado, here are another 20 Magic: The Gathering cards whose flavour is a cut above the rest.

Under the pretence of a mid-battle compliment, Liliana Vess directs a cunning barb at fellow planeswalker Jace Beleren.

As I’ve said previously, it’s great when a CCG’s in-universe characters reference each other via flavour text as it makes the world feel more connected and real.

Some mythic rare creatures are so terrifying – both in artwork and ability – that very little needs to be said in order to convey their majesty.

Phyrexian Obliterator is such a creature.

Leonos had no second thoughts about the abolishment edict. He’d left skyrunes warning of the eviction, even though it was cloudy.

I could understand an argument against Supreme Verdict’s flavour text as it certainly isn’t as ominous or profound as, say, Day of Judgment.

That’s what you would expect for a coveted board wipe, and yet the short but amusing tale of Leonos and his disrespect for life (as well as the weather) speaks volumes about the sheer dickery his guild is known for.

A golden helix streaked skyward from the Helvault. A thunderous explosion shattered the silver monolith and Avacyn emerged, free from her prison at last.

At the huge cost of 8 mana, Avacyn, Angel of Hope will be a rare sight at any gaming table.

The necessary effort in summoning her awesome power needs appropriate flavour text and her premier card here does an excellent job to the point where you can almost feel the triumphant thunderclap as she descends upon the battlefield.

“It might fight the Eldrazi, but don’t mistake it for a companion, Gideon. It’s not interested in your concept of strength through unity.”
—Najiya, leader of the Tajuru 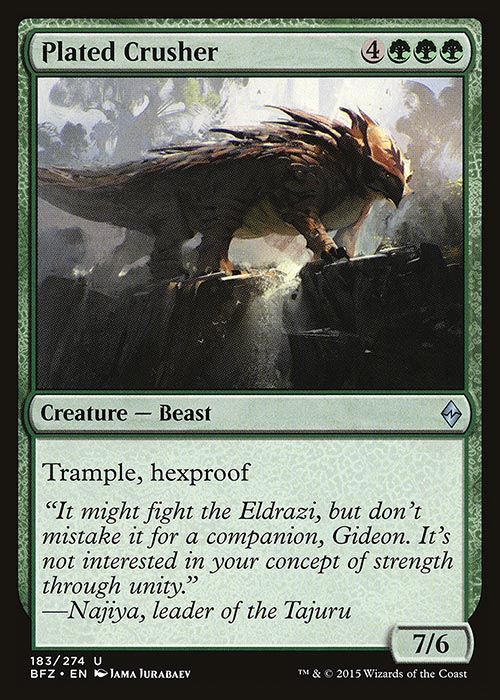 I like Plated Crusher because its flavour is that which helps expand the personality of the mana colours.

Najiya advises Gideon that not every creature on the plane of Zendikar is as willing to stand together as he is. It’s a nice clash between the common ideals of green and white and helps us understand what makes the beast in question so dangerous.

Emrakul does not grant wishes. Desires simply align to her will.

A card from one of the more recent Magic: The Gathering expansions called Eldritch Moon.

It’s a set with a strong Lovecraftian vibe and flavour text like this is just one of the many wonderful examples of how the looming threat of Emrakul is built up.

“The panic is amusing, but the real fun comes when the spell passes and the villagers start looking for a scapegoat.”
—Ludevic, necro-alchemist

A hilarious quip from Ludevic here is made even funnier by his parting jab at the nature of humanity!

“When everything hangs on a single moment, be sure you choose the right moment.”
—Jace Beleren

This is one of those quotes that highlights the loving connection between the game’s theme and its mechanics.

After all, many duels of Magic can be decided by a single spell played at the exact right time.

Upon discovering what had become of her sisters, Sigarda could only weep.

Sigarda won’t be the only one weeping should this melded monstrosity ever hit the table!

“This is bigger than you. All of you.”
—Tezzeret

The latest Magic: The Gathering expansions are notable for their Story Spotlight cards which when viewed in the correct order give players the broad strokes of that expansion’s storyline.

Battle at the Bridge is one such card from the recent Aether Revolt set where the insidious Tezzeret hints at the portent of things still to come in Magic’s future. It’s not totally unlike the teasers you get at the end of superhero movies!

“It is finished. Now the real work can begin.”
—Tezzeret

And here is the bridge that the previous card alluded to; a “bridge” between worlds.

Even when disconnected from its wider story though, the flavour text here does a wonderful job at selling the huge investment that players must put in, not only in building this marvellous structure, but also in activating it!

“Whatever the Eldrazi’s purpose is, it has nothing to do with something so insignificant as us.”
—Nirthu, lone missionary

A simple quote that fully sells the incredible power level that the Eldrazi creatures operate on.

When the Mirran resistance arrived, the furnace dwellers looked to Urabrask for guidance. His decree stunned the others: “Let them be.”

I don’t know much about the storyline to Magic’s New Phyrexia expansion, but the mythic rare Praetors have always held a certain mystique through their design and flavour.

Just look at this flavour text to the red-aligned Urabrask the Hidden. Despite the creature in question providing some very aggressive bonuses, it’s not often that you see a scheming side to mono red.

What has this mysterious hulk got up his sleeve?

“I am confident that if anyone actually penetrates our facades, even the most perceptive would still be fundamentally unprepared for the truth of House Dimir.”
—Szadek

Szadek effortlessly illustrates the machinations and overall flavour of his guild with this delectable quote to a rather horrible card!

“To be honest, I’m not quite sure what’s going to happen.”
—Renna, Selhoff alchemist

Vessel of Volatility might shock some with its high position here, but not many flavour paragraphs encapsulate the true nature of Magic: The Gathering quite as succinctly as this one does.

“As I died, I rejoiced. I would see my family again. But then I woke up back on the battlefield. Back in Kamigawa. Back in hell.”
—Kenzo the Hardhearted

The flavour text here was highlighted to me during a browse of another “best MTG flavor” list and indeed, it’s quite the sombre line!

“This is the source, the line unbroken since the calamity that brought such monsters to our shores.”
—Hastric, Thunian scout

Hastric seems to be an expert on the sliver species considering the volume of quotes he has on other sliver cards.

However, arguably none sell the importance and grandeur of the creatures quite like the one observing the rather Gigeresque Sliver Hivelord.

“I used to joke that he had been exiled for being too smart. Now I know why he never laughed.”
—Glissa Sunseeker

I don’t actually know if there’s a goblin card in Magic: The Gathering with bad flavour text, but this quote from Glissa certainly represents one of their best!

The vanilla creatures of Magic come with plenty of room for flavour text and you can see how that afforded the writers ample room here to extol the virtues of the common zombie.

“Some claim that rage is a cloud that obscures thought and vision. But I can assure you—I’ve never seen with greater clarity.”

Sometimes the best flavour lines are the ones that remind you what the mana colours truly represent under all the foil and game mechanics.

Red is indicative of fury, passion, and recklessness. Blood Mist’s flavour text recognises those traits and doesn’t apologise for them in the slightest. To ‘go full red’ you might say is to go all in on an aggressive playstyle or to give yourself over to savage attacks during every combat.

Blood Mist is card that is glad to be the way it is and that’s a superb way of using flavour to enhance the impact and legitimacy of your game.