Survive its many quirks and long-standing frustrations, and Ace Attorney will reward you with rich storytelling and unforgettable characters. 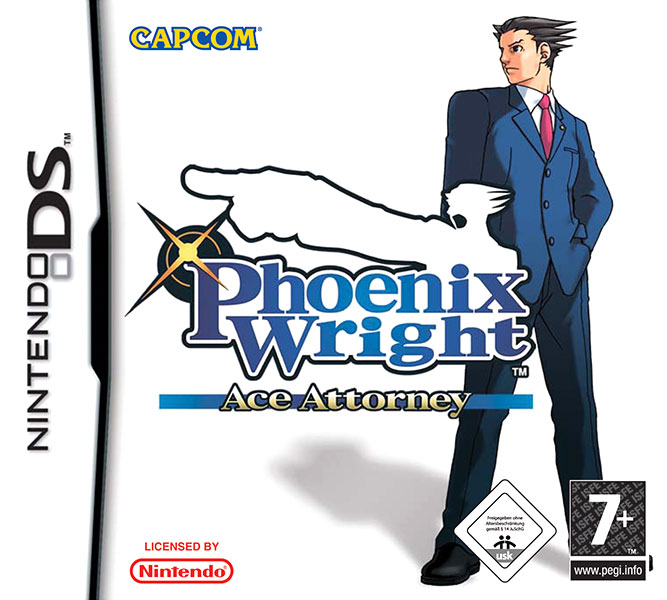 When I started my blog series about the Nintendo DS, I faced the inevitability of playing through two of its most famous and longest running franchises. The first of these; Capcom’s successful Ace Attorney series, was once a hot topic, and it’s one that I had previously dipped into when compiling my list of so-called overrated games.

Oh, dear. I absolutely needed to complete it this time, but what if I ended up feeling the same way as before? Phoenix Wright: Ace Attorney is known for being a long game, and a slow-burner at that. Was this experiment really worth the risk? Maybe the fact that I’ve spun off this post to start investigating more of the series is clue enough, though I still think it vital to readdress some of my original criticisms.

Whilst the mechanics are too abstracted to make Ace Attorney a true procedural drama, it does bear the hallmarks of one. Whether you’re combing locations for evidence or haranguing witnesses in the courtroom, each chapter is beholden to text-driven procedures. This is definitely not the sort of thing for those who dislike reading because each chapter contains a small novel’s worth of dialogue and explanatory text.

Even if you could easily skip through it all, carefully assessing transcripts and documentation is backbone content. Witnesses often reveal vital clues or contradictions when they speak, so you’ll always need to pay attention and not get distracted by the game’s zany Japanese flavour. The trouble is that Ace Attorney doesn’t always respect your time. You’ll certainly get your money’s worth here, what with the whole story lasting upwards of twenty five hours (!), but it’s important to note that a decent portion can be wasted on repeating sections.

The penalty system used in the courtroom scenes is to blame for this. Wright’s primary objective is to present the correct evidence to the judge, but he can only make a handful of wrong answers before triggering a game over. You can be thirty minutes into a perplexing trial only to run out of lives and have your progress ruined. Because the screen text can’t be fast-forwarded the first time it appears, you’ll then be forced to wade, agonisingly through the same content you’ve already seen in order to reach your previous position. Suspending cases from the pause menu allows you to save scum past such inconveniences, but the dearth of checkpoints is still aggravating. 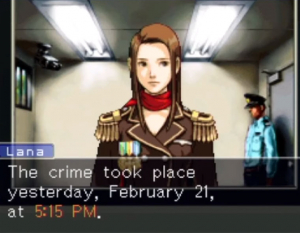 Visiting locations during the investigation phase is also fussy. The Nintendo DS port of Ace Attorney retains the clunky menu system from the Gameboy Advance original, which is pretty baffling considering the added screen space that the developers had to work with. Wright often has to visit places in a specific order, so this leads to a lot of awkward tapping as you try to remember which locations link together, whilst also figuring out which ones are likely to advance the story.

These frustrations were strong enough to destroy my enjoyment when I first played this several years ago, but in giving the game another chance, I have learned two important lessons.

Firstly, whilst I feel the investigation scenes can be mundane, the downtime does enhance the thrill of going back to court. Ace Attorney has a tough job being the first entry in its series, and it’s regrettable that its weakest cases – one of which featuring some particularly uninteresting detective work – are delivered early. But as my second lesson teaches: giving this game ample time to develop (whilst also enduring its more overt annoyances), is absolutely worth it in the end.

Why? Look no further than the stunning localization that Capcom has pulled off here. Ace Attorney is tremendously well-written with dialogue that is engrossing, clever, and genuinely funny. Wright’s inner monologue is full of amusing snark, and the interplay between him and his rivals can be a joy to watch.

It does come across as indulgent sometimes, but such instances are the exception to the rule. For every joke that doesn’t land is another running gag or recurring character (like the judge) who is reliably hilarious.

Art design is the other thing that Ace Attorney excels at. The character sprites are magnificently rendered. Phoenix Wright himself has a nice range of expressive poses, not least of which being his iconic finger point of doom, and the same goes for the supporting cast whose exaggerated emotions come through wonderfully in the crisp animation.

The flashing screen and loud sound effects you get when characters shout or interject certainly gets tiring, but it does reinforce how powerful the game is at commanding your attention. Even with their limited set of sprites to work with, the artists have milked a lot of drama from the game’s basic framework.

Ace Attorney’s vivid characterisation lends it a storytelling power that other video games will struggle to match.

Wright’s now famous catchphrases – “Hold it!”, “Objection!”, “Take that!” – are certainly not a novelty, even if you can occasionally yell them into the console’s microphone. Audio is valued very highly, and that’s especially true of the courtroom scenes where the music and sound effects will respond to the unfolding drama.

Ace Attorney is thankfully not shackled to realism. Hands slam into desks, damning evidence causes witnesses to wince in pain, and the static camera whizzes through the air in an effort to keep pace with the spectacle. It’s all very stylish, but the resulting thrills are not skin-deep. Each case will tempt players to solve a mystery whilst also trying not to telegraph the surprising twists and resolutions that make them so exciting.

If there’s one stylistic element that I don’t like, then it’s the distancing between these cases and their murder victims. Wright stops short of calling one female victim a skank, and then he spends time consoling her kinda-sorta ex-boyfriend rather than any grieving family members or close friends. The writers clearly didn’t want to pursue a morose tone and I get that, but later we hear a minor character explain how much interest a recent killing will generate for his hotel business, and that’s just too cold a tone for me. There are supernatural elements tossed in there, and these also downplay the more tragic story beats. I mean, it’s hard to lament a key character’s demise when, in the very next chapter, they’re possessing someone’s body and cracking wise as if nothing had ever happened to them.

As with a lot of these ingredients, it’s sometimes necessary to judge the overall experience on a case by case basis. The first episode acts as an introduction to the basic themes, which is great considering Wright’s role as the nervous rookie. It’s the later cases that will entertain the most though, not just because of their complexity, but also for their problems that require good lateral thinking and memorization in order to solve. The court record contains nearly every pertinent fact you’ll need and it’s always accessible via a handy screen overlay. It’s vital to pay attention to this because you can sometimes recognise a contradiction too early and get led down a false trail of thought which saps away your retries; very risky in the later trials because of how long they go on for. 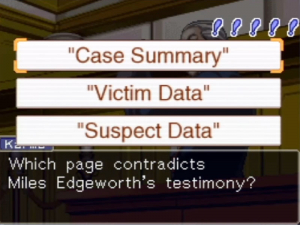 Taking your own hand-written notes can prove useful during questioning.

And speaking of long cases, special mention must be reserved for the fifth episode which was written especially for the Nintendo DS version. There is a lot to like about Case 5. There’s demonstrable sympathy for the victim, a worthy new sidekick for Wright, and a labyrinthine narrative full of juicy murders and betrayals.

Is it too long? Absofreakinlutely. The courtroom portions can be especially fussy on the order in which players need to pursue and present evidence, and I’m not sure why there needed to be so many false finishes, or that weird tangent about Chinese proverbs. The same quality wordplay and excitement is still there, however, and also notable are the new evidence gathering tools that get players to manipulate 3D objects using the touch screen.

I imagine that opinions about this feature will vary because it’s something that players have likely seen before (Capcom’s own Resident Evil being a prime possibility). That being said, I think it’s a nice experiment that, along with some cool 3D scenes involving video tape analysis, gives this long episode a welcome pinch of depth.

So…do I still think this game is overrated after what I’ve seen now? Overwrought at times maybe, but certainly not overrated. Ace Attorney’s characters are too likeable and its storytelling is too generous to upset me for long, even if some very minor tweaks could make its formula more accessible and ultimately more enjoyable for everyone.