Board Games Based on Video Games: #4 – Gears of War: The Board Game 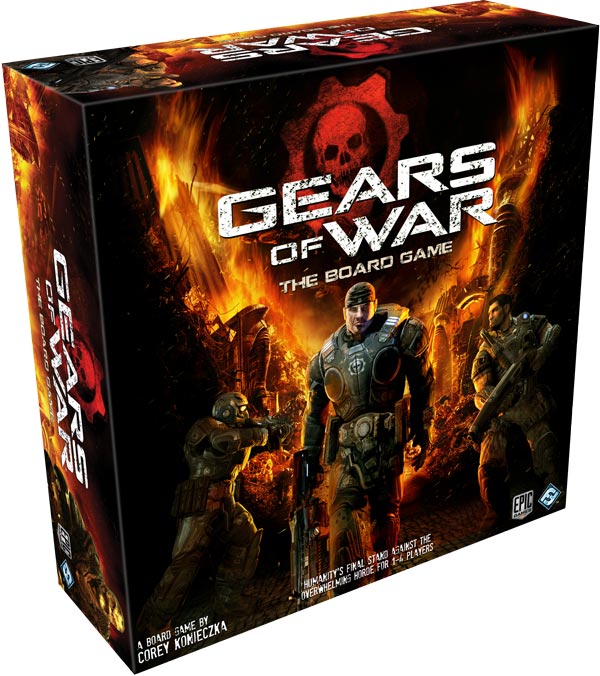 Originally posted on 21 August 2016, CelJaded is re-publishing this retrospective as part of its 2017 series that explores video game-themed board games. Enjoy!

Gears of War: The Board Game was teased in the summer of 2009 and despite an intervening two year period where information on the production was less than forthcoming, there was still a considerable level of hype leading up to its eventual September 2011 release date.

The Gears of War video game franchise was then helmed by Epic Games and with Gears of War 3 just around the corner, the time for a cardboard adaptation seemed right. Gears of War: The Board Game was in a favourable position considering the popularity of the license and upon release it enjoyed a positive response from critics and fans alike.

However, despite being a company well-known for their quality expansion sets, publisher Fantasy Flight Games did not see fit to support Gears beyond releasing a quick FAQ and a token ‘mission pack’ add-on. Ultimately it’s fair to assume that Gears of War: The Board Game sold below its publisher’s expectations and now that the license has expired it marks the end for an otherwise fantastic board game that could have gone a lot further than it was given chance to.

Designed by the talented Corey Konieczka, Gears of War: The Board Game is notable for its excellent use of theme. An “Ameritrash” production through and through, the game emphasizes key events and mechanics from the video games in a way that feels enjoyably accurate.

Up to 1-4 cooperating players take on the role of hardened marines (“COGs“) battling against the alien Locust horde in one of several different scenarios. The board is made up of individual cardboard tiles depicting areas segmented by walls or elevation lines and each one features a multitude of ‘cover spaces’ that allow players to bunker down and enhance their defence.

Fantasy Flight made shrewd use of Epic Games’ official art assets and the whole production looks appropriately sleek and glamorous. This superb production quality extends to the durable card stock, the generously-sized box, and of course, the plastic miniatures. The COG figures are difficult to tell apart at a glance, but then it’s just another excuse to get them painted alongside their gruesome Locust rivals.

Gears of War: The Board Game has a variety of mechanics ranging from the aforementioned combat dice rolls to its wider card-driven gameplay. Players take turns to play Order cards that will alter the flow of battle in their favour. One might grant your character multiple attacks and another might allow you to catch a breather or collect ammo tokens. Every card can also be pitched out of turn to grant one of three different ‘reaction’ bonuses including extra attacks, defence dice, or movement points.

In a unique twist – one that many people don’t appreciate – your hand of action cards also represents your current health total. Taking damage and performing actions will quickly deplete your hand of cards and so it’s crucial not to overextend unless you’re certain that victory is within grasp. Whilst the ‘cards as health’ mechanic is elegant enough and reduces token clutter, it does make for a stiff difficulty curve.

Like the video game, it is essential for players to stay in a cover space whenever possible. The dice-driven combat takes no prisoners and any player caught standing out in the open will be quickly ripped to shreds by simulated machine gun fire and grenade blasts. It’s not uncommon to suffer an abysmal defence roll and lose all of your cards in the process. Downed players can be revived by their teammates, but this is at further expense and can be dangerous when you consider that the Locust AI acts after every player turn.

Gears of War: The Board Game can be unpleasantly “swingy” because of these factors. Players can quite easily lose everything in the space of a single enemy attack and because combat is so persistent it makes recovering from such bad situations extremely difficult.

Players can perform ‘Overkill’ attacks to help even the odds, but whilst it’s incredibly entertaining to roll a whole fistful of attack dice, an ammo token is discarded regardless of whether you succeed in rolling well. You cannot fire a weapon that has run out of ammo and it’s not uncommon for longer scenarios to bog down due to a lack of bullets.

There are three specific Order cards that will grant you a much-needed breather when played, but again these cards can be unreliable because they can be prematurely discarded or buried at the bottom of their respective deck. Downed players will struggle to replenish their hand of cards and if you visit the BoardGameGeek forums you will find many variants suggesting a remedy to the overly harsh ‘bleeding out’ mechanic.

Luckily the variable setup routine for each scenario helps make any restarts feel less repetitive. There’s not a whole lot to do other than advancing through rooms, killing enemies, and picking up the odd new weapon, but these simple feats are still accomplished with flair. Collecting a new weapon always feels satisfying for instance and it’s rare that a turn will go by without a player using one of their COG’s special abilities.

In practice the game is extremely tactical and the cooperative experience is one that’s quick to reward communication between players. Each character and enemy figure feels suitably different from one another and it’s vital that players learn these nuances quickly if they want to stand any chance of seeing this difficult game through to its conclusion.

The Locust enemies are governed through the use of “AI” cards. Using an intuitive system of ‘if/otherwise’ commands, enemies are able to respond in different ways depending on the current state of the board. A Locust who gets activated in the same space as a player is likely to make a direct attack whereas a Locust several spaces away might sacrifice its attack opportunity to make extra moves instead.

There are few awkward aspects to this system (like how you’re encouraged to keep one weak enemy alive so that more don’t spawn), but on the whole it’s quite ingenious at simulating the feel of an opposing force working against the players.

Turns go by incredibly fast and in general the marriage of card play and dice, as well as the risk/reward ratio of ‘Overkill’ attacks are effective at keeping players engaged. But if there’s one major negative about this game then it’s definitely in its player scaling.

Despite being orientated around cooperative squad-based combat, Gears of War: The Board Game does not scale well with multiple players. As expected, each person at the table contributes towards a scenario’s running time and difficulty, but the downtime between player turns is similarly increased and there will be a lot more dice rolling to be done for all those additional enemy figures.

Each map tile is snugly designed, but you’ll rarely find enough cover spaces for all COGs to take shelter at once. 1-2 players certainly feels like the sweet spot and whilst you can get away with a reasonable experience at 3 players, 4 players will make the game bulky and overly difficult without house rules in place.

Looking past these flaws though reveals a tense and enjoyable cooperative game that’s faithful to its video game roots. There are no Descent-like campaign features or expandable character options here; just straightforward shoot ’em up action with a hard edge and a cooperative twist. There are plenty of hours play to be had with the default scenarios and the ‘Horde’ survival mode is particularly replayable because of its variable difficulty settings and undiluted premise.

Fans of Gears of War: The Board Game have always been eager to see more content though. Fantasy Flight Games did release a small card-based booster called Gears of War: Mission Pack 1 which adds two new scenarios and various enemies that you could theoretically add into the base game, but the support ended there. 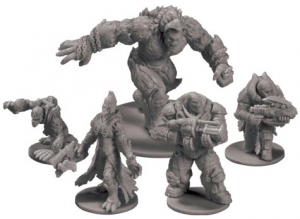 This was a huge shame as Fantasy Flight’s new Print On Demand model was a perfect fit for this game’s (assumedly intentional) card-driven design. The potential for new weapons, new characters, and other enemies and scenarios was there, but that potential went unrealised.

A month before Gears of War: The Board Game was released, Fantasy Flight announced that they had acquired the rights to produce board games based on the Star Wars licence. Releases such as X-Wing and Imperial Assault went on to become massive hits and it seems as if Gears of War just got lost in the shuffle.

As this reality began to sink in, fans began making their own content (again, over at BoardGameGeek) and I’ve even given it a go with Custom COG Pack 1 and Custom COG Pack 2.

Board games based on video games are pretty huge at the moment, but is it foolish to hope that Fantasy Flight Games renews the licence and revamps their stellar effort here?