The years have been kind to this Mega Drive classic that's just as fun and fun-ky now as it was in 1991.

With as much love as the Sega Mega Drive gets (and richly deserves), there’s no denying that its software library is thinner on games with long-lasting depth. Part of that is to be expected. Sega made their fortune in the arcades, and porting their incredible collection of rapid fire thrillers became their trademark strategy throughout the 1990s.

To put it another way: Sega wasn’t known as a purveyor of intricate first party titles designed to offer incredible replay value. The Mega Drive console was often criticised for having a shallow software library where arcade-y efforts reigned supreme. Indeed, if you’re looking for an epic 16-bit RPG to play today, you’re much better off looking at what the Super Nintendo has to offer instead.

But this is why Toejam & Earl is such a delightful anomaly. As a game of sometimes eclectic qualities, it’s difficult to think of another Mega Drive exclusive that looks and feels so incredibly different from video games of its day — to the point where historians still regularly disagree about the genre it should occupy!

After re-completing Toejam & Earl recently, I’ve come to appreciate just how well it has aged. It’s a rare title for the Mega Drive. It’s a 16-bit game of deceptive depth and variety; something that can be still be enjoyed today without much friction.

It’s during an opening cinematic where we first meet the eponymous pair of alien rappers. Their formerly bodacious rocketship has crashed to Earth, splitting into ten pieces which the players will need to help locate over twenty five increasingly crazy levels of exploration and experimentation. While historians sometimes disagree about the game’s exact genre, its roguelike credentials are certainly noticeable.

During their isometric travels across a fragmented representation of Earth, Toejam and Earl collect presents that contain all manner of weird and wonderful power-ups. Rocket skates and boomboxes; school books and tomato slingshots; the list is extensive! These presents begin each game with randomized contents, and because not every present holds something useful within its shiny wrapper, opening one can represent a considerable risk when you’re being harried by aggressive Earthlings.

Like many good roguelikes, Toejam & Earl is really all about survival. It’s a challenging game, with the option to generate a fixed world specifically crafted for maximum difficulty, or a randomly generated one where anything can happen! There are no passwords or checkpointing systems to rescue players who run out of lives. The entire game (which can run for a good few hours) needs to be beaten in one sitting. Unsurprisingly, I never could complete Toejam & Earl when I was a kid!

This is also because the game can be imbalanced in ways that are frustrating. Your typical Earthling is stronger and faster than TJ&E, with some of the nastier offenders, like the lawnmower guy or boogeyman, quickly demolishing your health bar if they get too close. Swimming is also a very suspect mechanic where your current health also counts as your breathing supply. Expect many accidental drownings because of that! 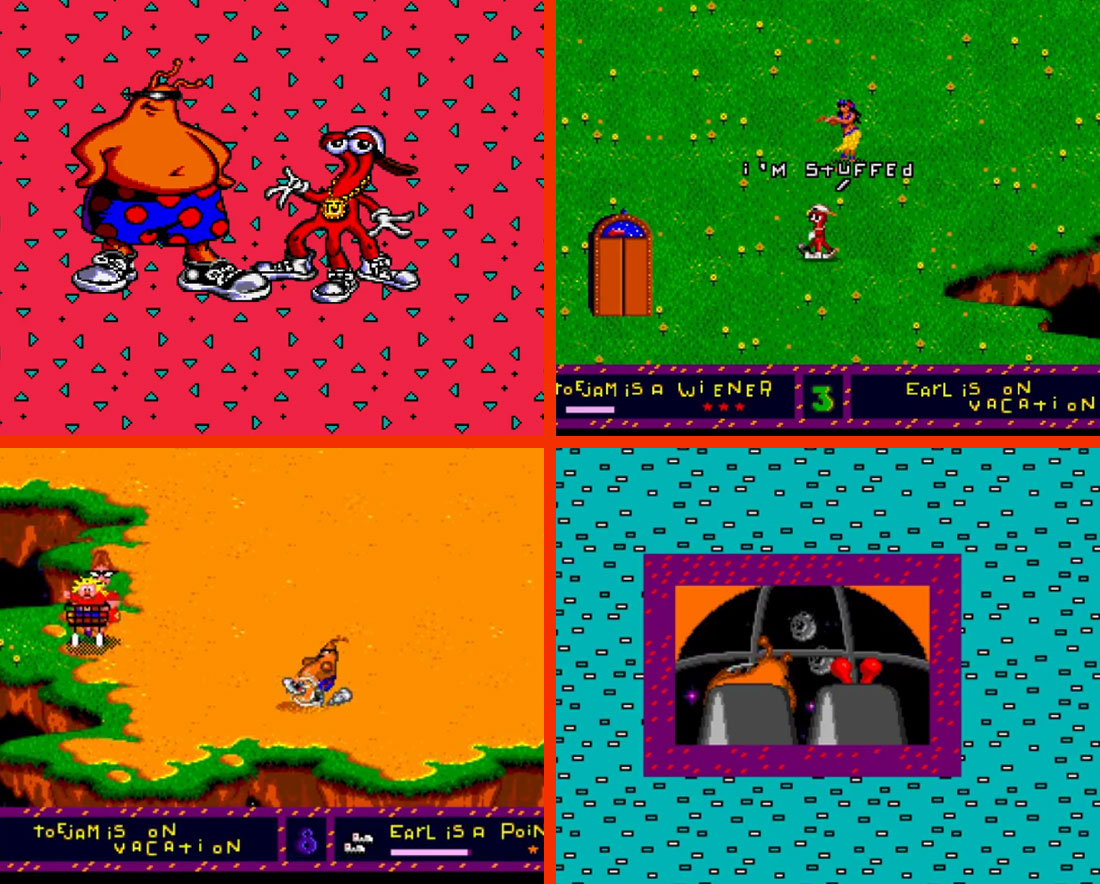 Toejam & Earl is very much a tongue-in-cheek adventure. Players earn points for exploring the map and opening presents, and these points add up to character levels with funny monikers like “poindexter” or “dufus”. Only the committed player will ever reach the rank of Funklord!

Even with those more punishing qualities taken into account though, Toejam & Earl is generally a fun challenge where each session feels unique. It can be a ploddy experience at times, but that’s where the game’s 2-player mode comes to the rescue.

Whilst things work perfectly fine with a solo player, Toejam & Earl’s 2-player mode is where the game’s heart beats to its most delectable rhythm. It’s yet another rarity for the time here, as the 2-player adventure features both drop-in functionality, as well as a dynamic split-screen system that changes the view depending on each player’s proximity to their buddy.

Sharing a single map screen is a bit clunky, but inventory screens are separate for each player, and you’ll discover many systems that adjust to suit the cooperative style of play. If a player opens a present whilst next to their partner for example, both players will reap the benefits (or consequences!) of the contents within, and should an ally ever get too low on health, performing a quick high five allows TJ&E to share HP.

Then we have the supreme sense of style that the game is so well known for. With its catchy soundtrack and wacky humour, Toejam & Earl is a charming game that is remarkably easily to like. It lives up to its funky reputation at every turn. The idle animations that see characters grooving to the beat; the strong use of colour that decorates every stage; even the in-game font approaches illegibility because of how it crackles with excited energy!

And if that wasn’t enough to charm you, then consider the bonuses. Easter eggs like the wonderful “Level 0” help illustrate the game’s commitment to originality and depth, and we mustn’t forget the “Jam Out” feature that transforms even the simple prospect of a sound test menu into a fun little minigame of its own.

Overall Toejam & Earl is a real gem. Being released in the same year as Sonic the Hedgehog was a tough rap for the funky duo to beat, but the fact that the series has blossomed into its a steady franchise shows how influential this original good time continues to be.