Board Games Based on Video Games: Episode #5 – Uncharted: The Board Game 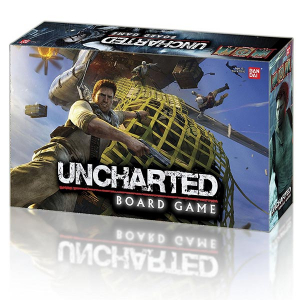 Uncharted: The Board Game

Fresh from their successful card game adaptations of Star Trek and Resident Evil, Bandai Namco Games would choose Sony’s popular Uncharted franchise as the basis for their next licensed tabletop game.

Uncharted: The Board Game – a strict misnomer seeing as the game is entirely card-driven – was created by Hayato Kisaragi; a Japanese designer perhaps best known for his acclaimed small-box game called Grimoire.

Uncharted is a similar production to the designer’s past works because competitive card drafting and hand management are once again the central mechanics that players must master in order to win.

Like the video game and associated movies that inspire it, Uncharted follows the exploits of adventurers Nathan Drake & co. as they scour the globe in search of mythical treasures. The board game apes this theme fairly well with players getting a unique character card as well as several actions representing the tools that each adventurer needs in order to fight bad guys and uncover priceless relics.

Players begin with a basic pistol and the ability to search, run, and jump, but over the course of the game they will draft new actions from a shared deck that’s kept on the game board. Once these action cards are paid for, players will add them to their tableau and thus expand their options for the rounds to come. These action cards represent the game’s primary method of interaction as each one comes with its own special effect that will allow players to do things such as draw additional cards, place search markers, and attack enemies or rival players.

The central zone contains a pool of treasures and neutral enemy cards that players must contend with. Placing search markers will allow players (either jointly or by themselves) to discover treasures which grant special boons and victory points, and defeating enemies comes with bonuses of its own too.

Its premise would suggest that Uncharted is a Eurocentric race to acquire victory points, but don’t write it off as flavourless just yet. The danger and excitement of the adventuring theme is stronger than it looks with this one due to several “trashier” elements including unique character powers and player versus player elimination.

Players can choose to focus on treasures above all else whereas others may seek to acquire victory points via killing enemies or activating combos of cards. Some players might abandon all of this entirely as they try to kill their rivals in hopes of becoming the last man standing. There are plenty of ways to approach the puzzle that each turn presents and I’ve even witnessed situations where every player at the table lost simultaneously due to a plucky boss enemy that nobody could counter in time!

The game’s print run ended when its licence expired, but you can still find the odd promo card available online.

What’s similarly cool about all of this are the character powers which typically kick in once that character has lost a certain number of Life points. Players who want to use their most powerful abilities will be operating on this knife edge; a tense state where one bad turn could immediately spell defeat. The added element of risk management that’s brought out here is quite fun during the final few turns especially.

Cooler still is the swift pace of play that sees turns broken up by alternating actions taken by each player. Card combos are rarely all that drawn out and there’s a careful balance that players must consider with regards to turn order as the first person to pass in a round becomes the first player to act in the next round; something which can be a huge advantage if timed well enough.

You wouldn’t expect any of these positive factors to be apparent by looks alone of course, but there’s no escaping the fact that Uncharted: The Board Game is partially let down by its appearance. Whilst the graphic design of the card borders, icons, and other gameplay elements are all sharp and evocative enough, the game does suffer from a rather bland presentation in which the obvious charms of the franchise fail to fully shine through.

The storage box is a weird size for one; an ugly oblong thing made of thin cardboard and an equally cheap insert. The extremely reasonable price tag makes up for this gripe, but when it comes to the cards inside the box, it’s apparent that far too many of them feature blurry screen-captured images over Naughty Dog’s gorgeous official artwork.

I made this same complaint during my recap of Resident Evil Deckbuilding Game and it’s not hard to see why it’s a similar problem here. You spend a lot of time looking at cards and so to have lacklustre artwork in the one place where you need your theme to really pop is incredibly off-putting. 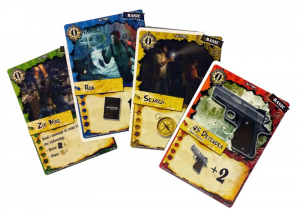 Action cards are never useless because they can always be pitched for a default bonus. The type of bonus depends on the card’s colour.

The enemy cards are a particular offender in this regard as they depict 3D character models of generic gun-toting bad guys that can’t help but look a bit shoddy. This is always going to be one of the big challenges when adapting video game material into board game form because using assets in this way, whilst accurate enough, is always going to run the risk of looking dated and unnatural.

Another potential sore point concerns the board. Uncharted is billed a board game experience and yet the presence of a board here is entirely superfluous! The printed score tracker, rules reference, and allocated spaces for cards are certainly useful and the sturdy panels help give the game a better presence on the table, but the fact remains that you could easily play without using the board at all.

I often wonder if it was intended to be a bigger deal during the early phases of design. Card games that feature hybridised board-driven elements like Trains and Clank!: A Deck-Building Adventure have steadily become popular in more recent times, so perhaps the designer originally proposed something along these lines only to later move in another direction.

I suppose it’s more likely that Bandai Namco were just keen to avoid the stigma of Uncharted being confused with yet another deck-building game and chose the “board game” subtitle as a way of distancing it from what they themselves were saturating the market with at the time.

The game’s trashy but fun survival mode, which sees players cooperating against a set wave of enemies, does away with the board entirely which further enforces the idea that it’s just window dressing when you really get down to it. 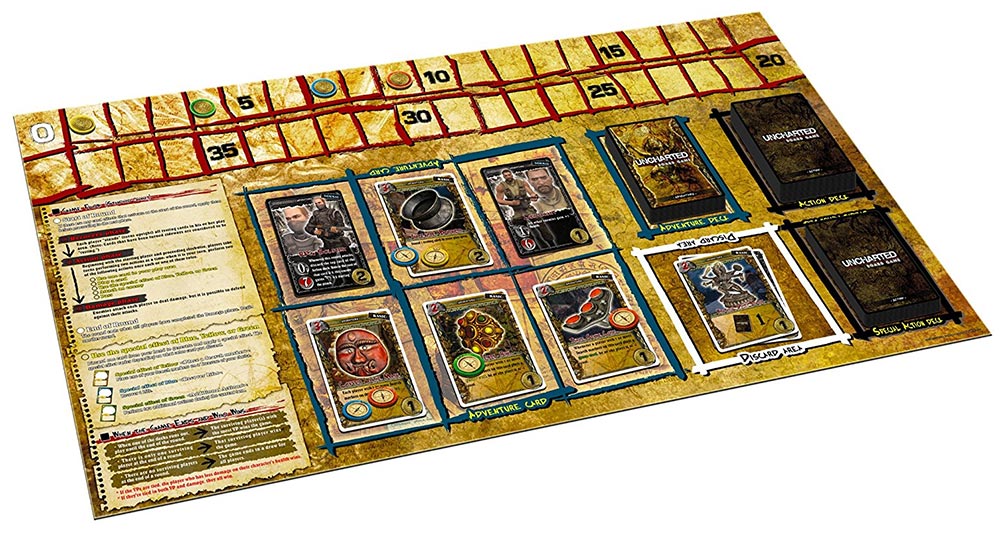 Uncharted’s rather unappealing game board is a useful enough asset, but it’s not at all integral to the experience and ends up feeling a bit wasted.

Fortunately, none of that really matters too much as Uncharted: The Board Game is still a satisfying affair with solid mechanics and plenty of different ways to play. This is one of those games where nearly every action you take comes with a tangible reward and thus discovering treasures and downing helicopters with rocket launchers never quite loses its appeal.

Learning to play well is going to take a few sessions, but the incredibly well-written rulebook has got you covered there with plenty of clear headings and illustrated examples to get players prepped with a minimum of fuss.

Uncharted: The Board Game certainly proves that appearances can be deceiving as behind its department store presentation lies a thoughtful and replayable card game that enthusiasts are bound to get a kick out of. This may not be one of those board games that’s highly representative of the video game franchise it’s based on, but I’m sure many fans will be content with the fact that it’s just a damn fine little game in its own right.