Welcome to the ninth part of a brand new CelJaded list for Top 100 Best Video Game Bosses. This post features entries #20 to #11.

If you want to know about the house rules that this list follows then be sure to read all about them in the introduction post. If you’re looking for another post in this same series then also consider visiting the associated index which includes a spoiler-filled readout of all the published entries and the posts in which they appear.

SPOILER WARNING: It’s hard to avoid mentioning spoilers in a list like this, but if you absolutely insist on being careful, click the button below to see the video games (not boss names) that will appear in this post. 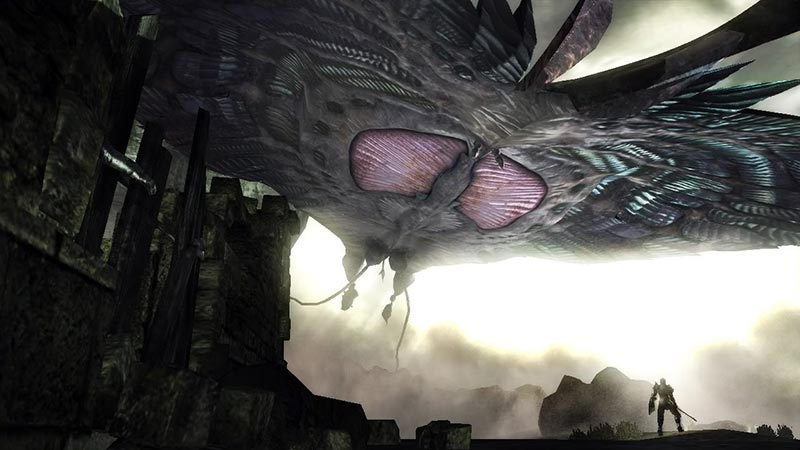 FromSoftware loves Demon’s Souls to the point where every subsequent entry in their Souls series bears its hallmarks. Dark Souls III has many of these nostalgic callbacks with its most obvious one being the boss battle players have against Yhorm the Giant.

On one hand this is an epic fight that sees players trade blows with a colossus who can only be significantly damaged by an enchanted sword called Storm Ruler. Whilst Storm Ruler’s magic blasts of giant-killing wind make for an awesome spectacle, they also make Yhorm far too easy and a bit clunky from a gameplay standpoint.

There’s no immediate sign that players require a specific weapon to use against Yhorm. The pittance of damage he receives from regular weapons is a clue, but there’s very little in the way of signposting to suggest that players should rummage at the bottom of his throne in order to find his Achilles heel. Learning how to then activate Storm Ruler’s weapon art is also problematic as it works via a ‘charge’ mechanic that no other weapon in the game uses.

These may be minor gripes for some, but it’s clear that Yhorm is a fussier affair than a battle versus a machete-wielding giant needs to be and its ease is incredibly disappointing considering the character’s stature in the overall story.

But what does any of this have to do with Storm King?

Well in gameplay terms, Yhorm is essentially a remake of this boss from Demon’s Souls. Like Yhorm, this flying stingray is also a giant ruler of his respective domain and again players are tasked with brandishing a magical sword called Storm Ruler in order to bring the big lad down.

Where Storm King succeeds a boss, however, is in a simple matter of design. You see, in order to reach him players must traverse the Shrine of Storms beforehand. This world is one of the harder levels in the game because of the Storm Beasts; infuriating stingray baddies who fly up high and fire their deadly barbs at players on the ground.

Considering the melee-focused combat in Demon’s Souls, dealing with these flying enemies can be a real pain in the neck and so the best tactic is to have it away on your toes and hope the inevitable flurry of stingers don’t skewer you to death. When you do finally confront Storm King and his entourage of flying beasties, the puzzle is once again upon you; find the Storm Ruler and wipe out everything that dares call the sky home.

This boss battle succeeds where Yhorm fails because players have the necessary prior knowledge about their enemy before the battle even starts. You already know that the airborne creatures cannot be fought hand-to-hand and so you naturally traverse the level looking for something to even the odds. Thus it’s much harder to miss the huge sword jutting out of a rock. And when you do wield Storm Ruler there are no awkward weapon arts or button combos to deal with; just simple projectile attacks that will have you carving up the skies in no time.

When Storm King finally arrives on the scene, you’re already quite comfortable with the wicked blade and the feeling of catharsis that you’ll get from finally turning the tables against these sadistic fish; enemies who have hounded you for an entire level, will feel very satisfying indeed.

The whole thing is arguably quite easy, but you won’t care because this boss is more about you finally being allowed to get your own back, and as an enjoyable finale to an otherwise punishing level, it just works so much better. 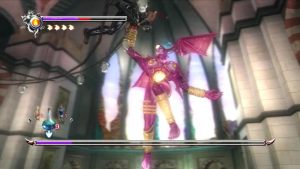 Her appearance as a naked succubus is hardly winning any awards for taste or originality, but as Ninja Gaiden’s infamous mid-game “wall”, Alma cannot fail to leave an impression.

Ninja Gaiden on the Xbox is well known for being hard, but an experienced action game fan can actually fare quite well until the tail end of Chapter 7. This is when the Greater Fiend Alma appears and it’s hard to imagine any player not getting annihilated during their first attempt at slaying her.

This is a steady battle where players must choose their moments very carefully because Alma’s blistering movement speed makes her very hard to hit and if you stand too close then you can fully expect to see your health bar pummelled by vicious laser beams and deadly grab attacks.

Alma is a video game boss in the purest sense; a true gatekeeper who ensures that only the most skilled players see what else lies beyond her reach. 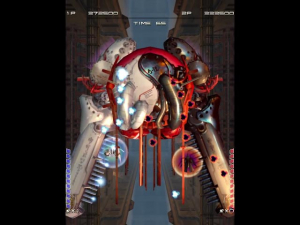 Ikaruga’s second level boss is an excellent example of the game’s concept of alternating states of fire and it’s a prospect that’s made even better when playing alongside a friend.

In order to damage this boss, players must first pry open the hatches on its power core by shooting bullets of the opposing colour. Once inside the players can start dealing heavy damage, but they must always be wary of the boss’s multi-directional fire and the continued retreat of the hatches. A second player is invaluable here as they can open the hatches whilst the first player dives inside to attack the power cores.

Superb interaction like this is far too uncommon in cooperative shoot ’em ups and yet Treasure make it look easy! 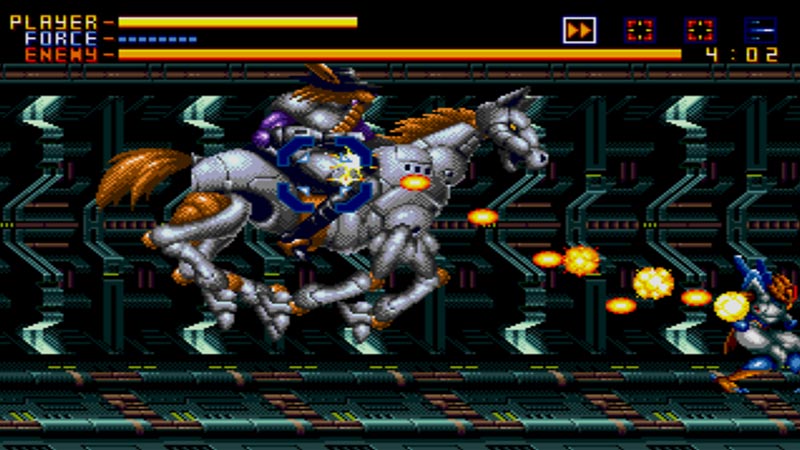 For a game that some would call nothing more than a glorified boss rush, there’s no way that Alien Soldier could fail to make this list. Yep, Treasure are at it again and this time they’ve delivered a truly over-the-top duel against a cyborg coyote cowboy who rides a robot horse. Uh-huh.

To think that this high speed battle was even possible on 16-bit hardware is in itself quite mesmerising and it’s manic moments like these that grant Alien Soldier a place in the pantheon of shoot ’em up classics. 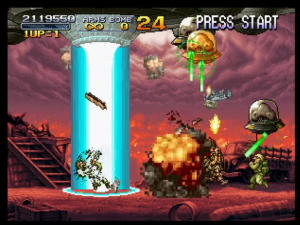 If memory serves correctly, this is the first end boss in a Metal Slug game where the enemy troopers come to your aid in order to help fight a common threat. Pretty soon the entire screen is blazing with flying saucers, bullets, and one hellacious mothership laser cannon. 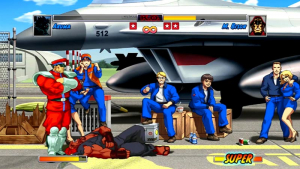 Whilst his unnecessarily over-the-top presentation in recent years has tarnished Bison somewhat, he’s still one of the most effortlessly charismatic villains in fighting games today.

In one of the first editions of Street Fighter II that I ever played, M. Bison was an unplayable boss character drenched in mystique. No voice files in the sound test alluded to his presence in the final level; just the crackling hiss of his kick-ass special move, the Psycho Crusher. Bison became playable for the first time in Champion Edition and he’s been one of my favourite characters ever since.

Instalments such as Capcom vs SNK 2 and Street Fighter II Turbo HD Remix (pictured) do the most justice to Bison’s original appearance as the irredeemably evil, yet remarkably well-dressed villain we all know and love. 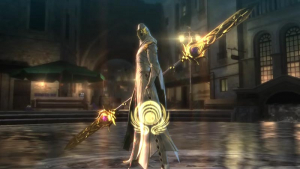 In action games of Bayonetta’s calibre, it’s a well-known understanding that the human-sized bosses are to be feared more than the giant ones!

Indeed, the first battle versus Bayonetta’s mysterious rival here takes place in the early stages of Bayonetta 2 and it really sets the tone for the sort of batshit insane action that lies in wait. In fact, it’s arguable that the spectacle never reaches highs like this again as the participants summon gigantic and fully 3D monsters to do battle in the background of the ever-changing battlefield.

Whilst the story stops us from having a true victor in this initial fight between the two, the clash that both characters make during its final moments is epic enough to warrant a premature trip to the post level scoring screen. 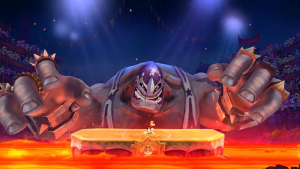 Rayman Legends is a fantastic video game with some equally fantastic boss battles to call its own. Take this match-up with a humongous wrestler for instance; surely the screenshot sells it better than I ever could!

This is a more methodical platforming boss than its rowdy presentation would suggest. There are no suplexes or submission moves to beware of here, as ol’ Luchador is more of a brawler at heart, but the characterization in the animation really is second to none. The crowd cheers, the bells ring, and just you try to suppress a smile during the final confetti celebration.

Once again this is a boss fight made all the sweeter by its wonderful backing music.

Over the years I’ve talked a lot about how much I like Pokémon: Black and White and the contributions it’s made to help keep the series fresh after so many bloated sequels.

The final showdown with your rival is a good visual representation of this movement too as just before you can reach the end of the Elite Four gauntlet, N crashes his flying castle into the estate and upsets everything by defeating the current champion before you can. What follows is an amalgamated sequence where players must climb the tower and catch their Legendary Pokémon before challenging N, who has a Legendary Pokémon of his own!

It’s a thrilling twist and the perfect send-off to a marvellous game. 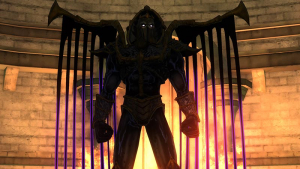 When talking about the topic of video game bosses, Champions Online is truly unique.

Upon reaching a certain level in this superhero MMORPG, you get the opportunity to design your very own Nemesis; a villainous NPC who will begin to show up in quests and storylines starring your hero.

With Champions’ incredibly robust character creator, this allowed players the freedom to create their own boss and as far as video games go, it was an amazingly cool prospect that had very rarely been seen before. Despite the system’s rather slight implementation at launch, it didn’t take long for Cryptic Studios to make things more interesting as during one of their very first content updates they unveiled the Nemesis Confrontation.

This endgame raid is for a full team of level 40 characters only and at the time it marked the final instance where players would encounter their Nemesis. The raid sees your team of five going straight into a dungeon lair guns blazing, and one by one the party encounters the Nemeses of each individual party member.

This is more of a showcase than a raid; one where each player gets the opportunity to flaunt the batty content they’ve created, shouting “mine!” whenever their own Nemesis appears in the game world as another miniboss. The team advances to the final room once all the Nemeses have been knocked out and from there it’s one final struggle against Shadow Destroyer (pictured) who acts as the real villain behind the scenes.

It’s not a particularly challenging affair, but as a cathartic ‘shoot everything that moves’ style of mission, “NemCon” is one boss rush that you and your friends won’t soon forget.