Welcome to the fourth part of a brand new CelJaded list for Top 100 Best Video Game Bosses. This post features entries #70 to #61.

If you want to know about the house rules that this list follows then be sure to read all about them in the introduction post. If you’re looking for another post in this same series then also consider visiting the associated index which includes a spoiler-filled readout of all the published entries and the posts in which they appear.

SPOILER WARNING: It’s hard to avoid mentioning spoilers in a list like this, but if you absolutely insist on being careful, click the button below to see the video games (not boss names) that will appear in this post.

Evolution: The World of Sacred Device

This feisty penguin brawler is the final obstacle players need to overcome in Kirby’s Dreamland. The fight in question is a fun one for Nintendo’s Gameboy; one that’s still fast and nuanced enough to be memorable despite the console’s relative lack of graphical power.

This vile teddy bear has mutinied against its human owner and with the help of several other resentful toys has taken over the whole house. Egad!

The showdown against Hugolin Bear is a straightforward shoot ’em up affair, and yet even that premise is done with panache in this wonderful Dreamcast exclusive. Every area of the house is ruled by a boss and defeating them will grant players another ally as later they will show up as fully controllable characters in the cellar battle against Hugolin.

Although you can only control each boss one at a time, it’s a lot of fun to take command of robots, missile buggies, and floating pirate ships in order to see off a cyborg teddy bear who has his own chicken walker!

True to Gears of War as a concept, there’s not much subtly to the Berserker. This blind but highly aggressive giant is impervious to standard-issue bullets and her head-first charges at the nearest sound will have any self-respecting player soiling their pants in fear.

The only way to defeat this monster is to train a satellite laser on her chitinous hide and whether it’s the first or third time you’ve done it, “dropping the hammer” always feels so damn satisfying! 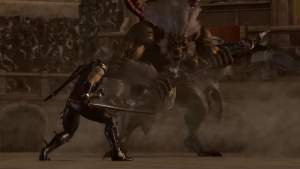 There are many bosses in Ninja Gaiden II that are worthy of mention with Volf, The Invincible Ruler of Storms, being my personal pick of the bunch.

What sets apart this compelling enemy for me is a question of balance. Unlike so many other enemies in Ninja Gaiden II, Volf doesn’t feel as cheap or annoying to fight. He doesn’t have any overly unfair grab attacks to worry about and although his stomps and slams inflict heavy damage, each one leaves him wide open for players to launch effective counter-attacks.

The battle itself takes place inside a sand-swept colosseum that reverberates with the bellows of a lycanthrope army and Volf himself looks mighty impressive with his fiendish arms and massive scythe on display. It’s a fight that perhaps brings more in terms of eye candy than gameplay, but for such a difficult video game anyway, Volf is just easy enough to be considered fun rather than frustrating. 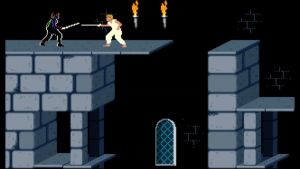 I have to admit that this entry stretches the definition of what video game bosses actually are, but then I couldn’t bring myself to exclude it either! This dark doppelgänger (called “Shadow Man” by developer Jordan Mechner) is an enigmatic foe encountered in the latter half of Prince of Persia.

After the Prince unwittingly leaps through a magic mirror, his evil twin emerges and immediately starts causing mayhem by stealing potions, closing off exists, and generally being a pain in the arse!

When the time finally comes for you to confront the doppelgänger, things take another unexpected turn as the twin begins mimicking your every move in combat. Striking your twisted double is fruitless as killing it only does the same to you and so the solution here is to actually put away the Prince’s sword and walk him into his twin! Thus the Prince’s soul is reformed and the quest continues.

This is the only time in Prince of Persia where players would ever use the sheathe command during combat and to get players to realize this after several level’s worth of conditioning is some genius puzzle design. 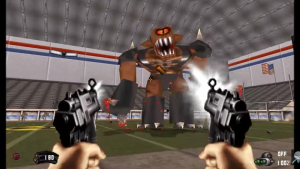 Duke Nukem 3D’s bosses are exactly what you would expect – huge alien beasts with missle launchers coming out of their various extremities, that sort of thing – although there is something cool about the final boss and the glittering stadium you fight it in.

Eurocom did a great job on the N64 port of Duke 3D where they actually replaced the Cycloid Emperor’s former 2D sprite with a full 3D polygonal model that’s so big it almost touches the ceiling.

From a gameplay standpoint, this boss battle is essentially another one of the brainless combat encounters that define so much of Dragon Age II. It’s certainly one of the tougher and more dramatic battles (if attempted one-on-one at least), but the fighting itself is not really the focus.

The Qunari are a tribe of Giants who value the usual warrior-like things; honour, respect, and that typical stuff, and yet the player’s dealings with their leader called The Arishok are made more interesting because of the character’s impressive grasp of politicking.

Without delving into the limp plot too much, it’s possible for players to acquire The Arishok’s “respect” before players confront him as a boss at the end of Chapter 2. Do this and you’re treated to a hidden scene where he points towards the player and announces to his brethren: “This is what respect looks like…”

There are no achievement pop-ups or explicit guidelines or rewards for accomplishing this minor feat; it’s simply a good thematic touch that further reveals just how much potential that this sequel really squandered.

#63 – Prince Eugene …For Evolution: The World of Sacred Device 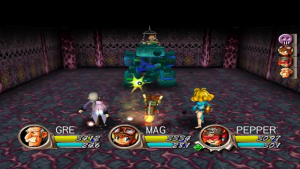 Not content with simply attacking you on foot whilst surrounded by his minions, Prince Eugene returns at the game’s climax in a giant mecha! Eugene’s basic claw attack is painful enough in this form, but then there’s his “Beat Up” special move which picks up your characters and slams them into the ground, and the “Rolling Gun” super that sprays your team with deadly poisonous bullets!

Evolution is a dull grind and yet the difficult bosses are a treat with the nasty Prince Eugene here perhaps being the highlight of the whole game.

#62 – Ulticannon …For Evolution 2: Far Off Promise 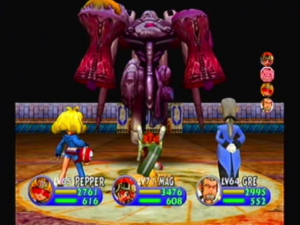 As if Prince Eugene wasn’t bad enough, along comes this deific monstrosity to terrorize Mag Launcher and his friends in the finale to Evolution’s hard-to-find sequel.

Thousands of health points, defence-draining laser beams, and sundering area-of-effect attacks make this final boss a nightmare to counter. Ulticannon is daunting and difficult, but it’s also another climactic send-off to yet another mediocre JRPG. 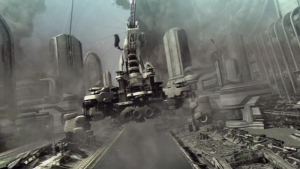 This post seems destined to strain the definition of what a boss fight really is, but once again I can’t fail to mention this remarkable enemy from Vanquish that’s so huge it acts as a set piece for an entire level.

The Kreon is a gigantic robotic weapons platform and taking it down requires a lot of effort. Getting caught in its beam weapon results in instant death and so you and your allies must quickly close the distance whilst laying waste to the minion robots that the platform spews from every open compartment. Slowing down the Kreon’s movement is a top priority too and eventually players will work their way closer and closer before smashing the energy core that brings the whole thing crashing down.

You might think this sounds similar to Gears of War 2 and its Riftworm encounter, but Vanquish’s Kreon is paced much better. The cinematic action fuses wonderfully with the game’s robust run and gun fundamentals and there’s a true feeling of scale here that I don’t believe the Riftworm ever really capitalized on.