Innovative, twisty, and blessed with the sort of punchy dialogue befitting a much bigger adventure; Ghost Trick: Phantom Detective is wonderful while it lasts. 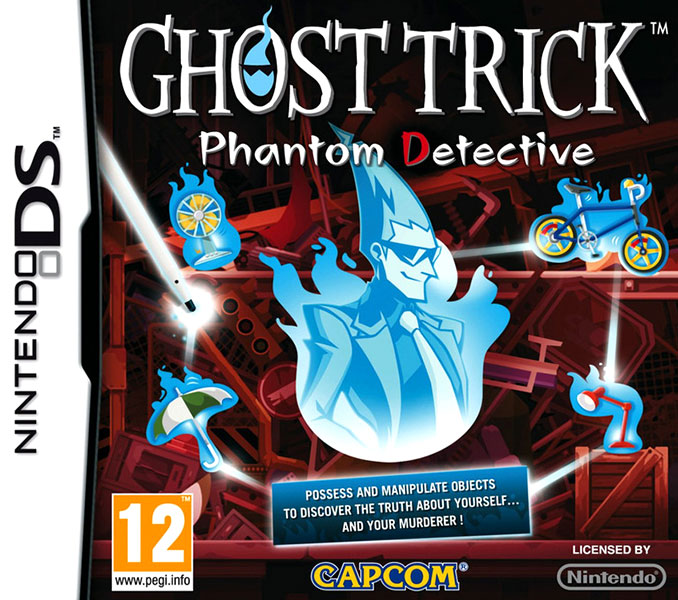 During the heyday of the Nintendo DS, the puzzle genre was very strongly represented on handhelds, to the point where I think Ghost Trick: Phantom Detective struggled to find an audience. This delightful side project from the creator of Phoenix Wright: Ace Attorney had the potential and the pedigree to be a big hit, but aside from some glowing review scores and enthusiastic fans, the game was on all accounts a commercial flop.

As was the famous case with Psychonauts, it’s upsetting when a genuinely original effort suffers from such dismal sales. A combination of apathetic advertising and a saturated market full of cheap “hidden object” games and Layton clones was probably what did Ghost Trick in. A shame because this particular effort really is as good as its devoted cult says it is.

The story begins with our protagonist, Sissel, immediately being shot dead during an ominous rendezvous. Death isn’t the handicap it used be though, as Sissel quickly returns as a ghost with a special “trick” that allows him to possess and manipulate inanimate objects in the physical world.

Without any recollection of his former life, Sissel’s more pressing problem is the mere 24 hours left before his spirit dissipates forever. Desperate to recover his memory before time runs out, Sissel finds a way to communicate with a young detective called Lynne and promises to help her uncover the conspiracy that set these bizarre events into motion.

Ghost Trick bears a passing resemblance to 1993’s ghostly action game, Haunting Starring Polterguy, where players also possess inanimate objects in a superbly animated and often humorous fashion. In Ghost Trick, however, players are more concerned with solving puzzles than scaring humans half to death, so whilst the story carries a (mostly) lighthearted tone, the actual gameplay feels a lot more structured than Polterguy’s antics.

Chapters in Ghost Trick are split between story cutscenes and conversations, and “Trick Time!” where players are typically trying to accomplish a specific objective via the touch screen. This is where you’ll experience the real meat of the game; using the stylus to manipulate everyday objects like fridge doors, ceiling fans, and footballs in order to create node-based pathways that Sissel can follow within the spirit realm.

Amazingly, Sissel can also travel back in time to the last four minutes before a person’s death, where he can then try to reverse the victim’s fate and assure their survival in a new future.

With so many themes and ideas working in unison, it’s commendable that Ghost Trick maintains such sharp coherency. Part of its success has to do with how well the game is broken up into chunks of punchy storytelling followed by puzzle-based zaniness. It’s a game that works exceedingly well for those who enjoy playing in short bursts.

For those looking for a more modern comparison, a video game like Gunpoint with its noir setting and layered puzzles is a good fit, especially so in matters of presentation. Ghost Trick is likewise rendered in 2D, featuring stylised character portraits and quality sprite animation that adds a fantastic sense of style to the proceedings.

As well as jumping between spirit nodes, Sissel can travel over active phone lines to reach distant locations that become important to the story.

There are times when playing Ghost Trick can feel a bit passive. If players activate a scene’s components in the wrong order then it will usually require a restart followed by a patient wait for the correct events in the solution to reoccur. This leads to some unavoidable repetition if you continue to screw up the timing of a convoluted puzzle; something that is usually quite easy to do!

Luckily the difficulty curve has been very carefully crafted. Players get a lot of helpful hints to avoid getting stuck, and the developers have added just enough complexity to later puzzles to make sure things don’t get boring.

As far as the gameplay goes, it must be said that Ghost Trick is more dependant on its narrative than anything else. Hardcore puzzle fans are going to find a pretty easy game here, so it may not be the ideal choice for those who don’t care about cutscenes or dialogue options.

Nevertheless, the experience is only ever enhanced by Capcom’s writing that delivers the story at a fast and funny pace. There are quite a few references for Phoenix Wright fans to spot, though such indulgence never compromises Ghost Trick’s own wonderful persona.

Characters like Detective Cabanela and the presumptuous hitman One Step Ahead are a joy to watch, and the writing remains sharp and humourous — “Fool! Don’t you know women can make themselves appear slim with fashion!?” — throughout the 12-hour adventure.

That’s certainly on the short side for most Nintendo DS puzzlers, and even though the story itself can make a reasonable case for being replayed, knowing the solutions will certainly take away some of the experimental fun that the first playthrough offers.

But when you have such a beautifully crafted tale with a unique premise, lovely graphics, and one incredibly “gamey” soundtrack to enjoy, what else can you ask for? A 2-player mode, perhaps?

With any hope, that’s exactly the sort of thing that was saved for a Ghost Trick 2 — let art triumph over commerce and make it happen, Capcom!